The attic of the lost time....is there, in the mind and dreams, where is possible to recover the hopes and the expectations, where what you want is what you can and everything becomes possible, where fantasy and creativity are not strangled from the rhythms of a phrenetic life and time flows slowly, where the mind flyes free with no restrictions, where finally one is free of being and can refuge in and take a breath. 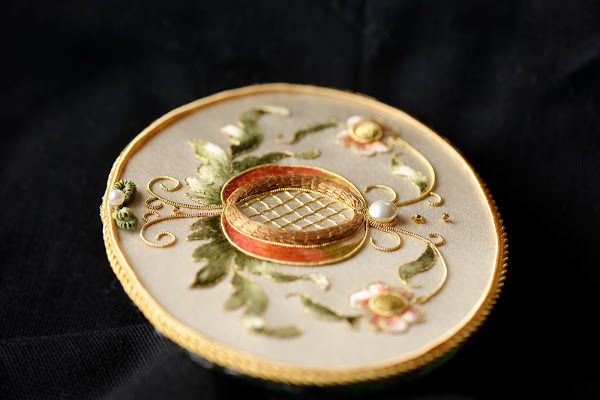 The Pomegranate -some news

Many of you will propably remember this project that I did for the Needleprint "A Mirror to My Art" contest in 2012 winning the t... 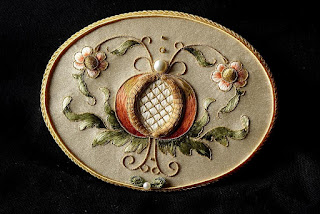 At Victoria and Albert Museum and ...5 minutes. 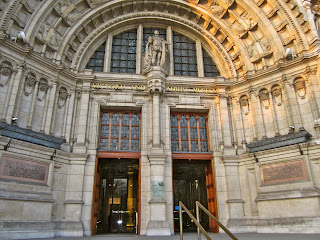 My travel to London was not only for the Knitting and Stitching show which was only my secondary goal as the main reason was to visit the 17th C textile department at Victoria Albert. The collection is located in the left Gallery just upstairs the main entrance.
We went there on Friday 11th in the afternoon as the Museum on Friday is open until 10.00 pm but...at the desk they told me that in the evening that Gallery is closed so I should come back in the morning!
Can you imagine how annoying was this as I was having only the day of Saturday left and I was afraid to not have enought time to go also in Portobello market.
To not waste the time, we had a look to some other departments and I have been really impressed by the painted and stained glasses that are exposed there, absolutely magnificent ! but all art is magnificent, isn't it ?
On Saturday morning we where there again and....at the desk they told me that as six attendants where sick, the Gallery that day was CLOSED ! Believe me, I was nearly going to cry ! I tried to complain but they said it was impossible to visit that department and also most of the embroidery of my interest where not there but somewhere else (I did not understand where) to be restored.
I was totally desperated, I was finally in there so near to those Stumpwork and raised embroideries and THAT door was closed !
I surrended (for a while) and we went at the second floor to see the porcelain department. All in that large room was gorgeous and we have found a good reason to come back...photos ! Yes, it was possible to take photos but we had no camera so...next time !
Going downstairs and every step more near to the exit, I was feeling more upset so I realized that what was happening was not right ! You cannot close just because of sick staff it's the Victoria and Albert ! and I come from Italy is not just around the corner !
So back to the desk asking to talk to a manager. He came in few minutes, I told him about my passion for historical embroidery and implored him to give me just 5 minutes to see the Martha Edlin casket and the unfinished Mirror; I think he saw the desperation in my eyes and said : " let me take some keys and I will give you your 5 minutes" followed by a nice smile.
The time he took to go and come back was never ending, I was afraid something else could happen but he finally arrived with a bunch of keys and took us in THAT room, just in front of the window containing the mirror and casket...finally !!!
The time I had was really 5 minutes and he was waiting on our back, so all my attention was on materials used as I already well know the design of both embroideries.
What I noticed :
* Needlelace on Mirror was made using different sizes of thread, a finer one for small elements which I can say it could be a modern 100/3 silk (Au ver a soie 1003) and a ticker one for larger parts like dresses that could be a modern 40/3 silk (Mulberry silks).
Silk in needlelace was not shining so probably it was a spun kind.
* long and short stitched parts on Mirror where surely made using a filament silk as those where really very shining still after all this time, size and kind of thread similar to Pipers silk floss gloss or to one strand of Chinese silk from Suzhou (Yeppie ! I was right !).
*The tickness of silk gimp on Edlin's casket making the leafs on front panel, is really very similar to the one that Access Commodities is recently selling, really very fine and soft. Maybe the construction of the gimp is not exactly the same but tickness is ok.
* The range of colours well matches with the historical line actually available on the market.

My 5 minutes are ended and it's time to left, don't ask me what else was in the room...I don't know!
Again a good reason to come back having all time available and take photos and notes !
Anyway sincerely thanks to Mr. Manager for those 5 minutes !

London and the Knitting & Stitching show


One of my dreams has always been going once again in London; I have been there 10 years ago and absolutely fallen in love with this lovely town. So at the last minute, me and a very dear friend Silvia, decided to go from Thursday to Sunday to see the Knitting & Stitching show in Alexandra Palace and then have a walk around the city in the other days.

We arrived in the early afternoon on Thursday and after the check in to the Hanger Lane Premier Inn Hotel (a really nice Hotel) we went to visit Harrods, I have never seen so much luxury and wonderful goods all together ! Sadly my camera is not working well so no photos, the ones you see in this post are taken from the web. 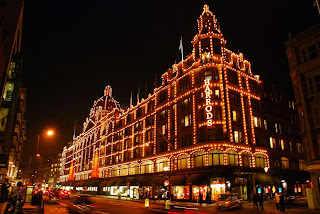 On Friday morning we went to the show; I have seen Nicola Jarvis exibition that was very nice and have also found very interesting the exibition of Phillipa Turbull with some old Crewel embroidery that where lovely. 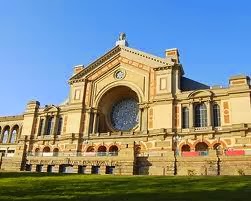 The show was full of all you can imagine about needlecraft and knitting and was a real joy !

Saturday was the day of Portobello Road Market at Nothing Hill, we visited only the part related to antique and collector goods, I wanted to buy everything ! 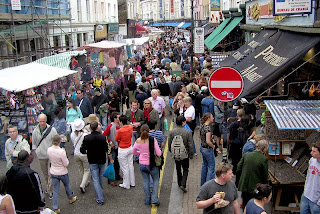 See those incredible walls that are located in to a cloth store, an amazing collection of old sewing machines ! 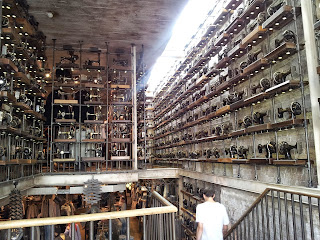 In the afternoon we had a lovely walk in Oxfort street and in Soho and we also visited Liberty a beautiful old store.

So "Keep calm and carry on " as Londoners are used to say...on next post I will talk about what happened at the Victoria & Albert Museum...soon !
Pubblicato da Francesca alle 16:36 Nessun commento: